Judy Watson creates a place of gathering at HOTA Gallery 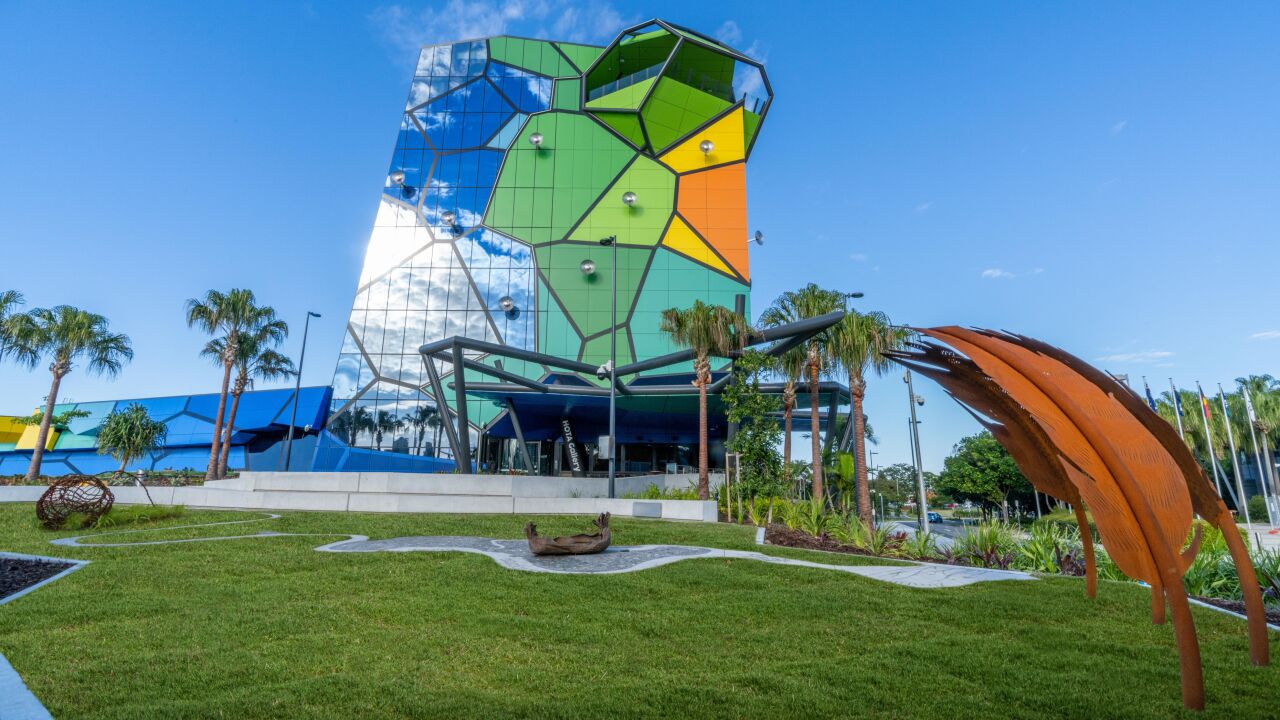 Judy Watson creates a place of gathering at HOTA Gallery. The HOTA cultural precinct is located on the lands and waters of the Kombumerri peoples and Yugambeh language region and recognises them as the traditional owners and ongoing custodians of the land, paying its respect to Elders past, present and future.

A second major outdoor commission at HOTA Gallery was revealed, with an incredible outdoor work by esteemed Waayni artist Judy Watson. The work nerung ballun (Nerang River), freshwater, saltwater commemorates the Aboriginal culture that lies within the ground, the sky and the waterways.

Rebecca Ray, Meriam Mir, Assistant Curator, told us a little more about this work, its inspiration, and the significance of its location:

‘The HOTA precinct has long been place of significance on the Gold Coast due to its location directly within the nerung ballun (Nerang River) catchment zones, the largest, most significant river system on the Gold Coast. For the Indigenous people of South East Queensland, the waterway encompasses vital cultural knowledges, oral histories and stories that connect Freshwater people with Saltwater people throughout the Gold Coast hinterland and coastal regions.

‘The concrete form represents the nerung ballun or Nerang River. Watson collaborated with Michael Aird, Aboriginal photographer and anthropologist, to source original mappings of the nerung ballun. These maps were used as a blueprint to feature the river form as a topographical map depicting the nerung ballun before European settlement.

‘Watson has embedded the nerung ballun form with oyster, eugarie and mussel shells to represent middens. Middens are the remains of meals of shellfish, such as oysters, that were consumed and discarded, forming mounds of shell deposits sourced from the sea and waterways. The jasper stones found throughout the river form were collected and generously donated and dispersed across the concrete by Aboriginal artefact maker, Rick Roser.

‘A piccabeen basket and dillybag sculptures have also been incorporated in collaboration and consultation with Carmichael and Harward. The basket and bag were originally made on the 2017 South Stradbroke Indigenous Artist Camp (Cross Currents: From Island to Mainland) – a five-day placement where emerging and established local Indigenous artists worked alongside leading artists to create site-specific works. Watson was the lead artist and worked to support Carmichael and Harward to create these ephemeral, sculptural works. The upscaled cast bronze piccabeen and the large hand twisted dilly bag represent eternal standing presences for the people who were and are still here, forever carrying the stories and histories of their original makers.

‘Through community consultation it was identified that these key sculptural elements call for a place of ceremony, a place of gathering, a place of education and knowledge, a way for cultural activities and a celebration of the dynamism of Indigenous culture.’

We are proud to have commissioned Judy Watson to create this new work at the entrance of the HOTA Gallery. Together, each component of nerung ballun (Nerang River), freshwater, saltwater speaks directly to the enduring nature of Indigenous creativity and celebrates the strength and resilience of Aboriginal culture. Through Watson’s collaborative practice, the entrance statement creates a vital sense of place for Indigenous and non-Indigenous people visiting the precinct.

Here's How You Can Make Mum's Day

Spend Your Long Weekend with HOTA

Find a challenge with Bricktionary

Art in your inbox

Get the best of HOTA delivered straight to your inbox.

HOTA proudly acknowledges the Traditional Custodians of the land on which we are situated, the Kombumerri families of the Yugambeh Language Region. We pay our respects to their Elders past, present and emerging, and recognise their continuing connections to the lands, waters and their extended communities throughout South East Queensland.